We are well into the project now- interviewing pairs of grandparents and grandchildren every day. The interviews have taken us into very rural areas, to villages, and to Temuco- a regional capital. Each oral history is different; sometimes, the interviews are short and concise, and other times, aunts, uncles, cousins, brothers and sisters stop by to listen and learn. To me, those have been the most rewarding—when people other than those directly involved in the project sit down and ask their grandparents questions. Today we will facilitate oral history #7, in a suburb of Temuco called Padre las Casas. Saturday, we will also be in Temuco, but Sunday and next week we will be traveling: to Victoria (by train!), to Mulchen (a small, rural village), and to Currarehue (a village in the Andes mountains), among others.

The project is moving quickly and almost flawlessly. I say almost because we have encountered a glitch- which is purely technological. During the first interview, I found out that my camera battery has stopped working (I know those are not technical terms, but basically it does not keep a charge). Consequently, I started using my phone to record the interviews. It is not the ideal situation, but because Temuco is not a large city, there is no place that sells the kind of battery I need. I could have gone to Santiago to get it (10-12 hours away), but the phone has been working just fine. It is a minor setback, but it didn’t cost us any time or affect our interviews.

Here are some of the most interesting lessons we’ve learned so far:

Thanks for reading!! Below are some snapshots from the videos we have recorded so far. 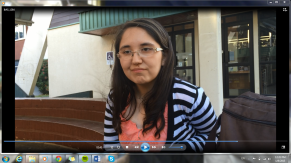