One of the things I’ve learned at Peace House over the years (and reinforced thus far this summer) is that homelessness often involves the art of surviving in very punitive public space. Folks who come to Peace House have very few rights as citizens in the eyes of the city/state. For example, one participant was ticketed for jaywalking across Franklin Avenue with no cars in sight. Homelessness often falls at the intersection of policing and racial profiling, as incidents such as this mount in the hot summer days.

Lately, we’ve been talking a lot about rights: do we have any? This has understandably involved many conversations about over-policing, but we’ve also used this as a jumping-off point to the voter ID conversation. Another ticketable offense in Minneapolis is, incredibly enough, not having ID on your person when in public space. Conversations in the community have definitely led to a consensus that this regulation disproportionately affects people experiencing homelessness, as the address on the ID must be current to avoid a ticket.

Hence, voter ID can be seen as an extension of surveillance that over-polices homelessness in Minnesota; as mentioned previously in many places, people who move around a lot or have no fixed residence will be disenfranchised should this referendum pass in November. A couple of ideas on addressing this so far have come out of Peace House conversations. One approach, which I’d call a harm-reduction approach, calls for doing our level best to make sure that all Peace House members have IDs, regardless of the outcome in November. Another approach is more political in nature and focuses on mobilizing our “constituency” to get out and vote in November, while agitating that others do the same. My role at this point is bringing these approaches together; to this end, I’ll be bringing an educator from the MN secretary of state’s office to PH in late July to participate in a meditation on the nitty-gritty of voting while homeless and how to best fight the amendment.

Next week, I’ll be off to the east coast for a trip that will hopefully involve visiting some like-minded organizations in New York and Philadelphia, and will conclude with the National Conference on Ending Homelessness in DC, where I hope voter ID will be a hot topic (and if it isn’t I’ll make it one!). I hate to end this post on a grim note, but it’s important to remember how much voter ID is part of a national attempt to disenfranchise people experiencing homelessness, poverty, and transitions in general, which includes college students. See it and weep! 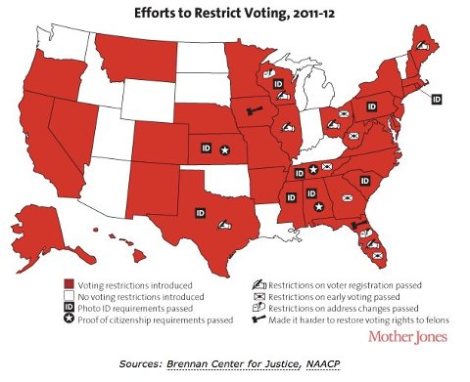 Happy 4th of July, and remember how far we have to go!